Why You Should Replace Your Framed Shower 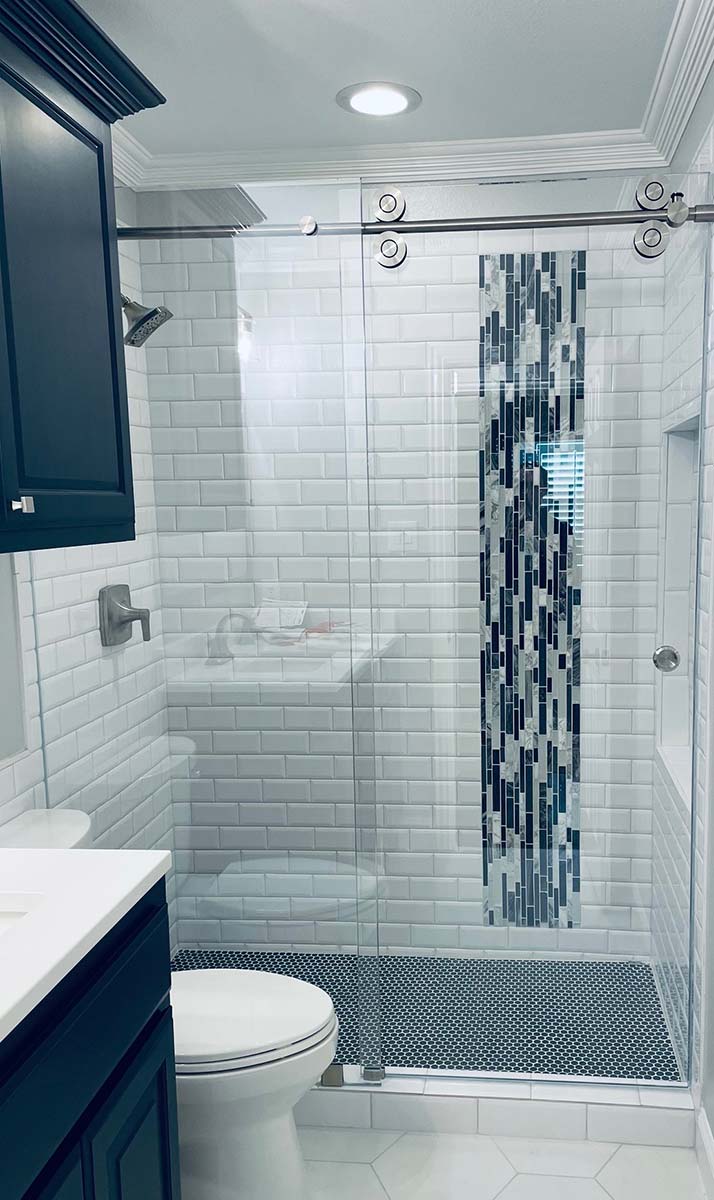 Why You Should Replace Your Framed Shower

They say beauty is in the eye of the beholder. However, no beholder likes an ugly bathroom. Why should you replace an old, framed shower with a frameless or partially-framed version?

Framed Showers are not only ugly, but they can be gross: caked with crud and gummy with black soap scum and grime. The black spots on the seal around your shower door can indicate mildew, the precursor to mold. Mold and mildew both thrive in humid, damp environments. Wiping your shower down after every use can help, but eventually, condensation will build up in the framing of your shower and result in some fungi growth. Mold and mildew can eventually result in damage to drywall and staining to furnishings and bathroom fixtures.

In addition, it’s not good for your health to be inhaling shower mold. Left unchecked, mold and mildew spores spread by floating through the air. When inhaled, molds introduce irritants and toxic chemicals to the body and can cause allergic reactions. Inhaling shower mold may cause headaches, sneezing, red, or irritated eyes, and skin rashes. Replacing your framed shower enclosure with a frameless version reduces the ability of mold and mildew to grow in your bathroom.

They improve the resale value of your home

How much value a bathroom remodel adds to your home will depend on which bathroom is being remodeled: your master bath, a secondary or guest bath, or a half bath. According to the RenoFi Renovation Index, on average, you’ll be able to recoup somewhere between 64% of the project’s cost for a mid-range remodel and 56.6% of the project’s cost for an upscale or master bath remodel. If you’re remodeling your bathroom to increase your home’s value, you will want to compare your space to other homes for sale and evaluate accordingly.

If your bathroom already in need of repairs, these should be definitely be addressed before listing in order for your home to be competitive. The Dallas-Fort Worth housing market is hot, but homes with great bathrooms will draw bigger selling prices than homes with outdated, less functional ones. If similar homes in your area have nicer bathrooms, you will want to make yours a viable option for buyers with a remodel.

They make your bathroom more enjoyable – for you!

Even if you’re not planning to list your home for sale, you may want a bathroom to remodel to improve the aesthetics and/or functionality of your space. While old-fashioned style may have its charm, modern fixtures now provide hygienic and functional convenience options that were previously unavailable. If your bathroom has damage or deterioration, replacing the cracked tiles, loose grout, and leaky sinks with beautiful, new updates will not only make your bathroom more enjoyable but more functional for you!

If you’d like to immediately improve the look of your bathroom, replacing the old shower enclosure is a must. What are your options? 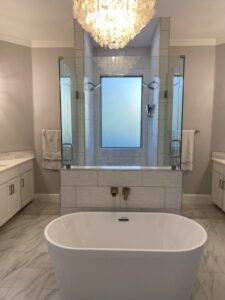 Sliding shower doors are composed of two or three panels of glass that install on a track to slide back and forth. They are an ideal option for small bathrooms because they don’t swing out, requiring additional space to open. Sliding doors are an especially popular option for showers with openings of 60 inches or wider.

Hinged doors are sometimes called pivoting or swinging doors. Because they swing outward to open, they typically work best in larger bathrooms because they require space to do so. There should be sufficient clearance between the shower door’s swing radius and any bathroom fixtures or another door or wall. 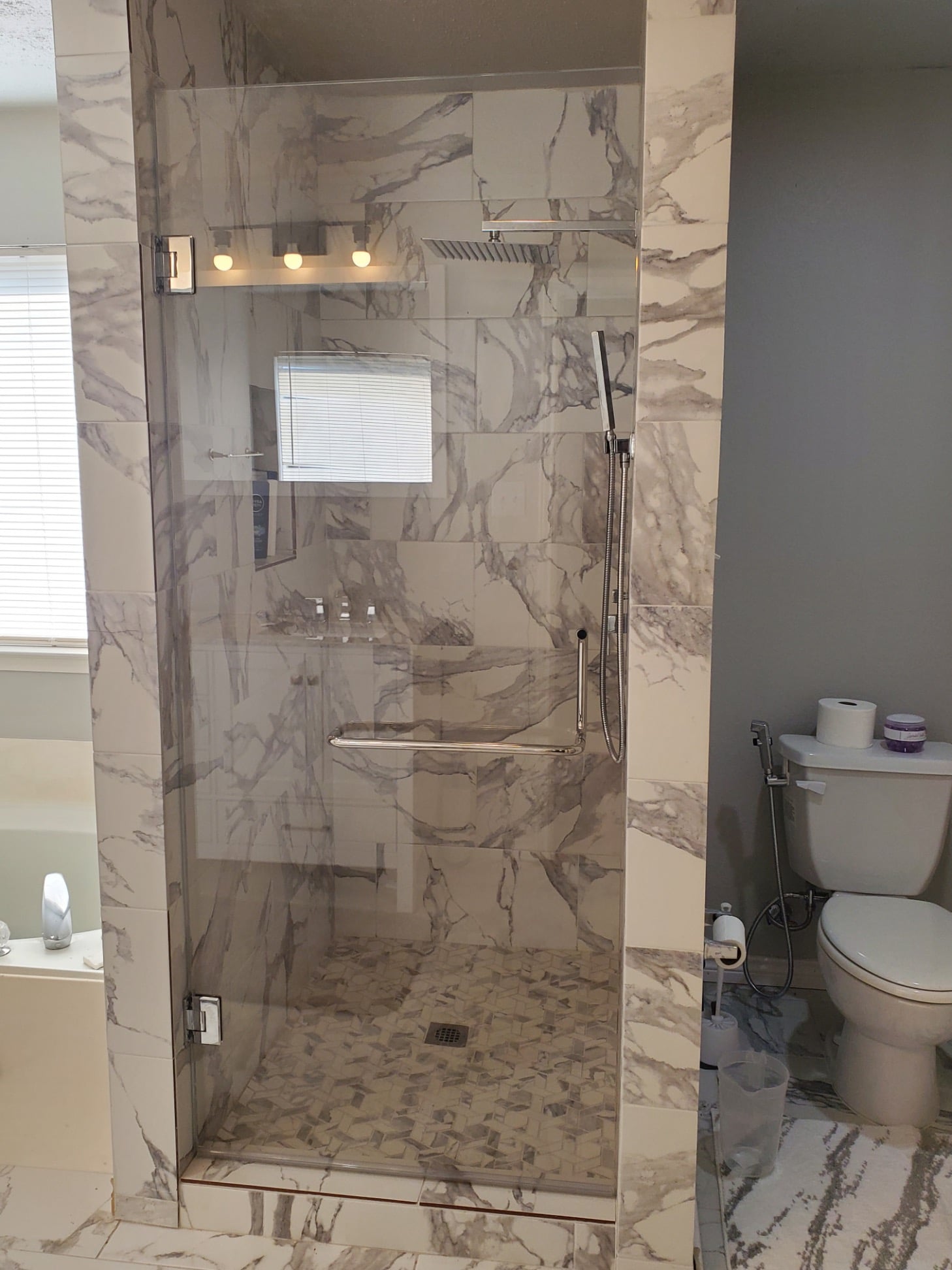 Frameless shower doors use tempered glass thick enough to eliminate the need for metal supports. The glass typically measures between ⅜ inch and ½ inch thick. Frameless shower enclosures are sleek and reduce visual clutter in space by allowing shower tiles, stonework, and fixtures to be displayed. While in the past they were most often used in contemporary style bathrooms, their versatility has made them popular options for many bathroom other bathroom styles.

Shower doors with metal framing at the top and bottom edge are sometimes referred to as semi-frameless. Because of the thickness of the glass involved, frameless shower doors tend to be somewhat more expensive than framed showers.

Framed shower doors are made of glass, supported by solid metal framing. Their traditional design and affordable price give them broad appeal for many homeowners. Depending on the design goals for the space, the shower’s framing can come in a number of different metallic finishes to complement the style of the bathroom.